skip to main | skip to sidebar

In the world of Cystic Fibrosis, this is an exciting time!  Medications are being engineered to address specific mutations and find a cure for CF.  This is why knowing one's genetic mutations and being on top of the news about those mutations is vitally important.

In order to more effectively communicate with each other, we have created a Facebook group for those with the genetic mutations DF508 and 621+1G->T.  It's easy to join the group, simply add yourself to the group at https://www.facebook.com/groups/354896417903931/ or leave a comment with your Facebook name and we'll add you. 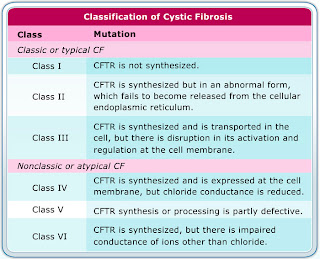 ::This article was found in the Cystic Fibrosis Foundation's Connections E-newsletter online for March 2010.  Any thoughts?:::

Targeting Mutations that Cause Cystic Fibrosis
New drugs in development may one day allow patients to receive treatments that specifically repair the genetic mutations responsible for their cystic fibrosis. Understanding which type of mutation a patient has could pinpoint which new drugs could work for them.
More than 1,000 mutations in the CF gene cause the disease. Researchers classify these mutations into six types. Using these classes, scientists can better understand the disease and are developing therapies to treat it.

What Do the Mutation Classes Mean?
Not every case of cystic fibrosis is the same. A person’s mutation determines what goes wrong on a cellular level, and which therapies may work to correct it.
The CF gene makes a protein called the Cystic Fibrosis Transmembrane conductance Regulator (CFTR). The protein is a chloride channel. Chloride, a charged particle in cells, flows out of the cell through the center of the channel and water follows behind it. The water keeps mucus thin so it can move out of the lungs.
In healthy people, CFTR is located on the surface of cells lining the lungs and other organs. People with CF have little or no CFTR, depending on what class their mutation falls into.

What Are the Different Mutation Classes?
In three mutation classes, insufficient CFTR is made — Classes I, II and V. Class I mutations are nonsense mutations. Because of missing genetic information, these mutations stop cells from making the complete CFTR protein.
In Class II mutations, CFTR folds incorrectly. The malformed protein cannot move from the inside of the cell to the surface, where it is needed. The most common CF mutation, Delta F508, is a Class II mutation.
Class V mutations decrease the amount of functioning CFTR that makes it to the cell surface.
In the other mutation classes — III, IV and VI — CFTR is produced and delivered to the cell surface, but the mutations keep it from working properly once it is there. Patients with these mutations sometimes have less severe CF symptoms because there is some functioning CFTR on the cell surface.
The “engine” of CFTR is dysfunctional in Class III mutations. The protein does not respond to chemical signals that tell it to work, explains Steven Rowe, M.D., assistant professor of medicine at the University of Alabama.
In Class IV mutations, not enough chloride moves through the opening of the chloride channel. Class VI mutations cause the protein to pull away from the cell surface too quickly, creating a shortage of CFTR.

Why Do Mutations Matter?
Identification of mutation classes gives researchers a better understanding of how certain drugs, currently in clinical trials, may help specific CF patients.
CFTR-targeted therapies could work at the cellular level, addressing the cause of CF rather than treating symptoms.
“We hope these classes will allow us to develop treatments that target the basic defect and restore health in people with CF — possibly in ways we never imagined,” said Rowe.

A Quick Reference to CF Mutations
Cystic fibrosis mutations fall into six basic categories or classes. Here is a quick guide to the mutation classes and what they mean.

Severity of chest disease in cystic fibrosis patients in relation to their genotypes.

Correlation between mutations and age in cystic fibrosis in a French Canadian population
http://jmg.bmj.com/content/37/3/225.extract
Posted by BG at 11:13 AM No comments:

Blogs About Children With This CF Mutation Combination